NLCB Play Whe drawings are held from Monday to Saturday at 10:30 AM, 1:00 PM, 4:00 PM and 6:30 PM NLCB Play Whe results are published instantly after the draw result announcement: 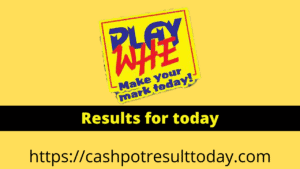 You probably noticed that some numbers just seem to appear in every other draw! These frequently drawn numbers are known as hot numbers and they are used by many experienced lottery players due to their likelihood to be drawn.

Check out the list of the most, and the least, frequently drawn numbers in Play Whe lotto!

Hot numbers which are drawn the most times in the past 200 Play Whe draws:

Cold numbers which are drawn the least times in the past 200 Play Whe draws:

We have collected some important questions and answers about Play Whe.

How to play Play Whe?

The play slip has three play panels. You may play 1, 2 or 3 panels. Each panel contains numbers 1 through 36. Select one number per panel by blocking it out in pen or pencil. Do Not Use Red Ink. If you make a mistake, mark the “VOID” box. Do Not Erase. For each panel, you may select the desired amount to wager.

To play your numbers for more than one draw at a time, mark the appropriate box on the left side of the play slip under “DAYS”. This will play your panels for as many days as you want, up to six days (Monday through Saturday). Days selected may or may not be consecutive. Also, you can select the desired draw(s) by choosing both, or Midday or Evening only. The draws selected will apply to all days selected.

You will receive a ticket from the Online terminal that lists your chosen game, draw date(s), and numbers. Remember, always check your ticket before you leave the store.

What is the History of Play Whe game?

An ancient pastime, Play Whe was known as Chinapoo; a numbers game played by persons who were influenced by intuition, superstition, dreams, and caprice. Brought to Trinidad by Chinese immigrants, Play Whe was traditionally called “Whe Whe”.

No longer in its original form, it has been creolized, acquiring words (marks) like Janette (#16: Low-Class Man or Woman), Crapaud (#13 Frog), Corbeau (#11: Vulture), Coco Bay (#24: Eye Infection ro Leprosy, from the name of the bay at Chacachacare where there was once a leper colony). It has retained one Chinese word, albeit corrupted, ‘Tie Pin’, correctly T’ai P’ing (#12: Heavenly Kingdom)

The Symbol of Play Whe is a drawing of the Chinaman jumbie, or Chinapoo. His anatomy is divided into some 36 segments, each marked with either mark, partner, or spirit numbers, depending on the chart.

What is the prize for Play Whe?

When do the draws take place?

How to claim your prize?

All winning tickets must be validated at an On-Line Terminal and claimed no later than 180 days from the draw date.

The Agent will pay prizes of $5,600 or less you must greater amounts at the National Lotteries Control Board.

What are rules and regulations?

This website is not an official website and is not associated with NLCB Lotto or any company that manages any product for which their services are employed.

The information available on the https://cashpotresulttoday.com website is solely for the use of players and prospective players of NLCB Lotto. These are information pages only and are not intended to encourage participation in lotteries.

Do check your results from any authorized lotto dealer near you to confirm your winnings.